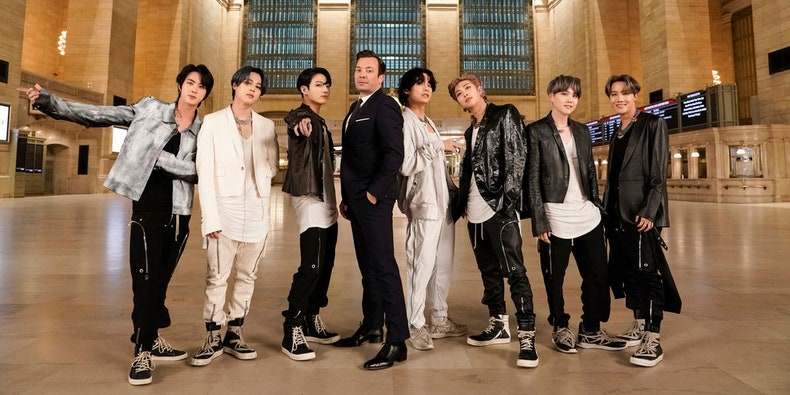 The latest episode of The Tonight Show Starring Jimmy Fallon was an episode-length celebration of BTS. The band, who just released their new album MAP OF THE SOUL : 7, hung out around New York City with Fallon.

They sat down in an empty subway car with Fallon for an interview about their careers, their album, and their love of John Cena. They also spent some time at the iconic Katz’s Deli, played a tournament of subway games, and ultimately performed their song “ON” inside Grand Central Terminal. Watch it all happen below.

Instead of being filmed inside 30 Rockefeller Center, this episode of Fallon was primarily filmed on the subway. Fallon delivered his monologue on the train and did his “Thank You Notes” bit. The Roots also performed on the subway with Run-DMC’s Rev Run.

BTS’ world tour begins in April. They recently performed “Old Town Road” at the Grammy Awards with Lil Nas X. Read “BTS: How the Biggest Boy Band in the World Stays Radically Korean” over on the Pitch.

James Cromwell Gets Emotional While Talking About How He Came Up With His Famous ‘That’ll Do, Pig’ Line In Babe
Sen. Ted Cruz Refuses to Apologize to Paul Pelosi For Attack Conspiracies
The Swifts
The Walt Disney Company to mark 100th anniversary with new experiences
Pusha T Posts Bible Verse After Consequence Slams His Kanye West Loyalty