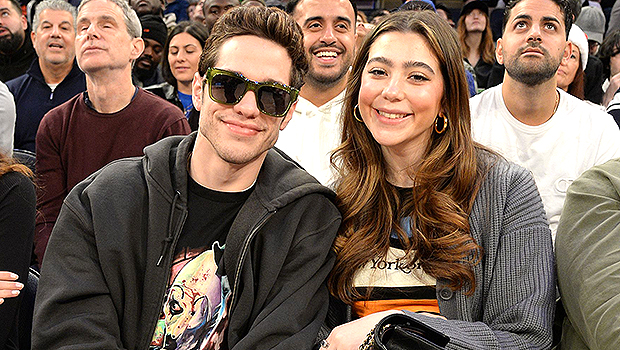 Pete Davidson isn’t wasting time feeling bad after rumors that he’s already split from Emily Ratajkowski, 31. The Saturday Night Live alum, 29, made the very best of the holidays by hanging out courtside with his sister Casey Davidson, 25, on Christmas at Madison Square Garden. In pics, Pete was his usual, casual self for the Knicks game in a black hoodie, graphic tee, and jeans paired with black sneakers. He also wore a wide smile and a pair of sunglasses. Younger sister Casey rocked a cozy button up sweater, leather pants, gold hoop earrings, and classic Converse sneakers for the fun family outing. In another pic, they were seen sitting alongside The Vampire Diaries star Paul Wesley and Natalie Kuckenburg.

The sighting comes after rumors that Pete was on a track to a serious relationship with model Emily — only to see it fizzle out as quickly as it started. In fact, Pete and Emily were also seen courtside at a Knicks game last month in November. However, a source told HollywoodLife after the mom of one was spotted kissing artist Jack Greer that it isn’t “exclusive.”

“Emily is exploring single life, but it has no reflection on her connection with Pete,” the insider told HL EXCLUSIVELY for a December 24 report. “She thinks he’s great, she just isn’t available for a commitment right now. They’re still talking, it’s just not exclusive.”

As for that undeniable chemistry, the source explained that Emily is still fresh out of her marriage to Sebastian Bear-McClard, from whom she split in July. “They have great chemistry and he finds her insanely attractive, but he also knows that she just got out of a serious marriage,” the source continued. “Emily is a free soul and he respects that. Regardless of who else she sees, he is down to spend time with her. He doesn’t want to put too much pressure on her, so he is leaving the ball in her court.”

In addition to Jack, Emily has been seen hanging out in New York with DJ Orazio Rispo. Pete and reality TV icon Kim Kardashian, 42, went their separate ways in August after a highly publicized 9-month relationship.

‘Avatar 2’ Rises To No. 5 On All-Time Global Chart; Will It Overtake ‘Titanic’ Next?
Look Back at Lisa Marie Presley’s Most Tender Moments With Her Kids
Taylor Swift Shares New “Lavender Haze” Video: Watch
Andy Cohen Apologizes To Larsa Pippen For ‘Screaming’ At Her During ‘RHOM’ Reunion
Frankie Muniz Says Winning A Race Would Be One Of Life’s Greatest Moments