Saturday AM Update: Don’t Worry Darling at this stage of the weekend looks like it’s going to cross $20M. All of this depends on Saturday business coming in at last $7M or more after a $9.4M Friday.

Who in town isn’t watching this pic’s box office opening like a horse race at Yonkers raceway? All the behind-the-scenes gossip swirl, Harry Styles’ big debut as a star, and the quirky, sci-fi genre movie that it is – no studio executive in town wants this movie to fail. Critics promptly wished ill will on the movie after New Line screened it early timed to its Venice Film Festival world premiere at 38% Rotten –more on that in a bit.

Don’t Worry Darling‘s CinemaScore is a B-, which was always to be expected, and its grades are lower on CinemaScore/Screen Engine’s PostTrak, which is always a harsher measure, at 3 stars and a 67% positive. Not exactly the type of exits you want for great word of mouth momentum, however, all of these numbers are in line for a genre movie and are no surprise. Rotten Tomatoes audiences are at 83%, much higher than critics.

Providing hope for a good Saturday night: On PostTrak, the pic has a 53% definite recommend, which is actually quite healthy. Only 15% said they wouldn’t recommend Don’t Worry Darling. Also a great sign: 59% bought their tickets on the day they saw the movie which indicates walk-up business.

Here’s the thing: Should Don’t Worry Darling fall apart tonight, it boils down to the younger female skewing audience who always come out in the previews and opening Friday for their types of movies, then fall away. On Don’t Worry Darling the under 25 is massive at 44%, followed by all the older women who are in love with Styles, at 29% over 25. On PostTrak, the under 25 set gave the movie its best score of 78%. A smart distribution source kept telling me before this movie opened that in regards to the pic’s box office pattern, Don’t Worry Darling was Twilight; what they were referring to was a -40% drop for that movie between its Friday and Saturday. If all goes well, Don’t Worry Darling will drop 20% to 25% today from its $9.4M Friday.

Another thing should Don’t Worry Darling underperform: It’s not the end of the world financially for the film. The pic is expected to overindex overseas, and at $35M production cost, a high teens start is arguably more respectable financially than the $19M opening for TriStar’s The Woman King (the glory in that pic’s opening was how the studio bested its $13M-$16M tracking in a week’s time since world premiering at TIFF). Woman King‘s second weekend in No. 2 is coming in at $10M-$10.8M, -43%.

Why do many want Don’t Worry Darling to do well: Because it’s an original movie, with gorgeous stars and an auteurish sensibility. The pic’s success here means wonders for other types of theatrical films being developed around town at a time when studio executives are banging their heads against the wall as to what is theatrical. Personally, I think the movie is light years better than Wilde’s Booksmart and demonstrates an ambitious range. This movie has no place on a streaming menu. It deserves all the loudspeaker publicity it’s getting. Warner Bros. really put their best foot forward in championing this movie, and for the pic to come out and do $20M (right now rivals see $21M+) that’s proof to Warner Bros. Discovery Boss David Zaslav that he should continue making these types of non-tentpole movies. He’s already been dazzled by the Cannes Film Festival premiere of Elvis, and saw how his theatrical distribution and marketing apparatus delivered $150.8M domestic, $285.8M WW for that Baz Luhrmann movie; the studio’s film slate doesn’t need to be entirely built on DC. There’s room for other voices. 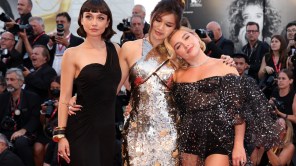 At the end of the day, the challenge with Don’t Worry Darling wasn’t the schadenfreude from the tabloids; heck all of that only raised intrigue around the film. And by the way the hiring of Styles as the hunky husband was a genius casting move, and the fuel which is spinning turnstiles. On PostTrak, the No. 1 reason why moviegoers went to see this movie at 39% was Styles. Thirty-eight percent said it was because of Pugh, 31% said it was the cast as a whole, while 29% went for the genre of it all. We all talk about how stars don’t open movies anymore, and here we have a young superstar in Styles who could be recharging the box office for years to come.

The challenge with Don’t Worry Darling was simply in the pic’s ending. That was tricky. Of course, we’re not spoiling it, however, a wise studio marketing vet told me that it would have been better if the trippy pic ended in a jump to black. “The reviews would have been higher, and the box office would be higher. Jump to black works every time,” the source told me.

Another thing about Don’t Worry Darling‘s ending, and why that’s the real catalyst here as to how rich or poor this film will be: It’s too wonky for the young female audience it’s pulling in, and not clever enough for the upscale moviegoers this film is squarely aimed at. But at the end of the day, when it comes to the movie business, it’s an art, not a science.

Personally, I think Don’t Worry Darling is the best movie I’ve seen all year, however, critics and awards prognosticators had it out for this movie from the moment light hit the screen. One rival awards illuminati thought I deserved an intervention for my love of the film; “It’s WandaVision!” he screamed at me. Sure, it’s not a perfect movie, but what’s unfortunate is that it seems that many assessed the film on its gossip than the feature which it is. The movie was made during Covid, had to pause, and Warner Bros. Motion Picture Boss Toby Emmerich kept it chugging committing more money. As we mentioned, New Line Boss Richard Brener championed Don’t Worry Darling, New Line taking the film off the table in a fierce auction, as Deadline first told, with a $20M budget commitment at the time.

Other diagnostics on Don’t Worry Darling, the Florence Pugh, Chris Pine, Gemma Chan feature played best on the coasts where nine of the top 10 runs came. The AMC Northpark in Dallas #7 was the only multiplex from another region in the top ten. PLFs and Imax are driving 19% of ticket sales. Note, young females don’t purchase higher priced format tickets. Top markets for Don’t Worry Darling were New York, LA, San Francisco, Boston, Phoenix, San Diego and Austin. For all the talk that women never attended the movies during the pandemic, they’re coming out here at 73% to this Wilde movie.

Young females head to the movies in packs, and that’s clear in the PostTrak here for Don’t Worry Darling. The overall audience who attended with one friend was 22% vs. the under 25 female demo who at 28% brought a friend. Overall moviegoers attending with 2-4 friends was 20% vs. the under 25 female demo which at 28% came in a group of 2-4 friends. Fifteen percent of the audience saw the movie with their spouse, versus 14% who came with a boyfriend/girlfriend.

There was another wide release this weekend in 20th Century Studios/Disney’s re-release of Avatar which is eyeing $9.15M at 1,860 theaters in third. The whole re-release is to generate buzz for the James Cameron sequel, Avatar: The Way of Water and rivals believe this was a smart promotional move on behalf of Disney to do this. The studio removed the pic from Disney+, and there’s surprise footage from the sequel you can watch if head to the re-release this weekend.

While I hear Sony didn’t spend much for the Labor Day re-release of Spider-Man: No Way Home, Disney took out TV spots for Avatar with a high single digit spend, money which they will earn back at the end of the day with this whole Avatar exercise.

A near wide release is Bluefox Entertainment’s Railway Children at 923 theaters. The WWII British family set picture from Morgan Matthews was 64% fresh from critics, but PostTrak audiences gave it an 85% positive and 55% recommend. Fifty-nine percent were women, with 60% over 35 and 45% over 45. Caucasians showed up at 89%, 7% Latino and Hispanic, 0% Black and 4% Asian/other. The Southeast and Midwest were the best areas for this movie, but the grosses were derailed at $231K for the weekend, which means a $250 theater average. Yikes.

Warner Bros.’ original projection for the movie starring Harry Styles and Florence Pugh was $17M this week, while industry sources peg the R-rated pic’s start between $20M-$26M. I had heard that AMC’s internal projections were $27M two days ago — and that was based off presales.

As of right now, the audience score for Don’t Worry Darling is high at 87% on Rotten Tomatoes, beating that of critics’ whine of 36% Rotten. In early Comscore/Screen Engine PostTrak figures, which we’ll update throughout the weekend, Don’t Worry Darling notched three stars, with a 66% positive. Women under 25 — those Harry Styles fans — are turning out big as expected, with 40% giving the pic a 75%, followed by women over 25 at 28%, men over 25 at 23% and men under 25 at 8%. The 18-34 demo repped 64% of Thursday night’s attendees.

The film arrives after weeks of sometimes-bizarre headlines chronicling various controversies, from Shia LaBeouf’s withdrawal from the project and questions over Florence Pugh’s absence at a Venice Film Festival press conference to the debunked suggestion that Harry Styles spit on Chris Pine.

Olivia Wilde Opens Up About ‘Don’t Worry Darling’ Spit-Gate Drama: “Harry Did Not Spit On Chris”

The number is bigger than last year’s female-skewing House of Gucci, which made $1.3M in its Tuesday previews before Thanksgiving, and just under Gaga’s A Star Is Born, which made $4.55M in its combined previews ($3.2M in its sole Thursday previews) back in October 2018. You want auteur genre comps? Don’t Worry Darling also made more than the previews for Jordan Peele’s Get Out, which had a $1.8M Thursday night.

Meanwhile, Disney’s re-release of 20th Century Studios’ Avatar posted previews of $2.5M in presales.  Around 45% of sales are for IMAX 3D, and total 3D is over 95%. The film is projected to post a weekend in the high single digits. This puts the pic’s domestic gross at $763M, where it resides as the fourth highest ever in U.S./Canada, after Star Wars Force Awakens ($936.6M), Avengers: Endgame ($858.3M) and Spider-Man: No Way Home ($814M). The James Cameron directed Oscar winner earned $3.5M in 32 offshore markets after two days putting its global take at $2.85 billion — still the highest grossing movie ever ahead of Avengers: Endgame ($2.79 billion).

Among those titles in regular release, TriStar’s Viola Davis female African warrior film The Woman King ended its first week with an estimated $25.1M at 3,765 theaters. The movie is expected to hold with a second weekend of $11M-$12M. It made $1.2M on Thursday, -8% from Wednesday.

The Rookie: Feds Season 1 Episode 9 Review: Flashback
An $4 Silk Pillowcase Was a Game-Changer for My Hair & Sensitive Skin
Stuart Weitzman Is Launching Handbags—And They’re Perfect for All Your Holiday Parties
Willow Review: Disney+ Sequel Series Is Worth the Wait — Fun, Accessible Fantasy at Its Most Charming
‘The New Kids’ – ‘Friday the 13th’ Director Sean Cunningham’s Other ’80s Teen Horror Movie