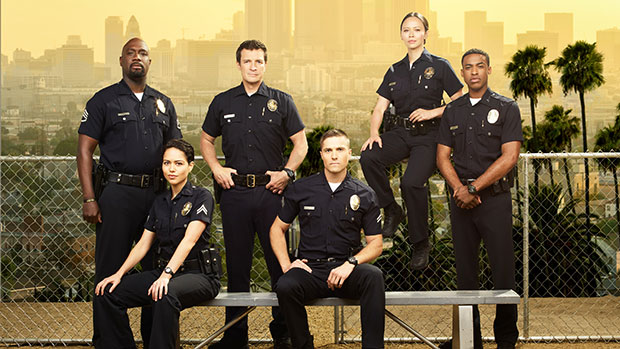 ‘The Rookie’ has lost an original cast member. One of the show’s beloved police officers was killed off in the season 4 premiere.

The Rookie season 4 picked up right in the wake of the season 3 finale. Both Lopez (Alyssa Diaz) and Jackson (Titus Makin Jr.) were taken, and it was all hands on deck to get them back. Unfortunately, one of them died earlier on in the premiere.

A surveillance video of Lopez and Jackson being taken revealed Jackson’s fate. Lopez and Jackson were put into separate cars. Jackson tried to fight back, and his kidnapper shot him in the back. He was then pushed into the trunk of a car.

Lucy (Melissa O’Neil), Nolan (Nathan Fillion), Bradford (Eric Winter), and more watched in horror as they witnessed what happened to Jackson. Grey (Richard T. Jones) confirmed that Jackson was killed as the crew swarmed a warehouse to search for Lopez. In the midst of their grief, The Rookie officers still had to get Lopez back. They went to great lengths to save her and her baby.

Grey later arrested Armando, the man who killed Jackson, after a chase with Lucy. Grey admitted that there was a part of him who wanted to kill Armando because of what he did to Jackson, but he did the right thing and arrested him.

As she made a daring escape, Lopez took her power back and killed La Fiera. The show flashed forward three months later after Lopez gave birth. Lopez was still grieving the massive loss of Jackson and went to visit his grave in the final moments of the episode.

She brought along her son to visit Jackson. “I can’t imagine going in and not seeing your smile or hearing your voice. By the time my leave’s over, maybe I’ll be able to face it,” a teary Lopez said at Jackson’s grave. Lopez honored her fallen friend in a touching way — by naming her baby after him. “Come on, Jackson. Let’s go home and see daddy,” Lopez said to her son as she said goodbye to Jackson.