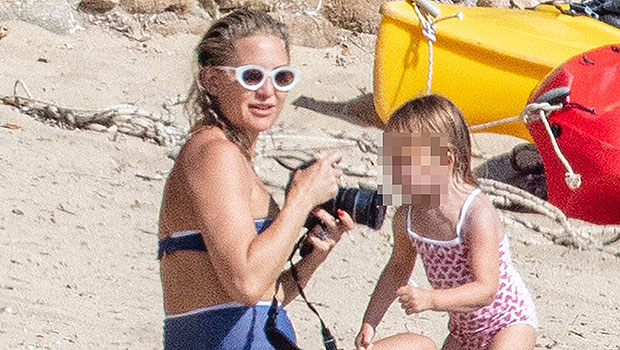 Kate Hudson looks toned in a printed bikini as she resists a potato chip from daughter Rani after a workout. See the endearing photo.

Allow Kate Hudson’s daughter to make the case for potato chips after a workout. The Golden Globe winner, 42, shared a cute snapshot with little Rani, 2, on Instagram on Wednesday, July 21 that showed the duo on a couch after some exercise. While in a printed bikini that showed off her toned figure, Kate resisted a potato chip from her expressive daughter in the photo.

“Rani doesn’t quite understand my post workout routine yet,” the actress captioned the post. Her daughter, whom she shares with partner Danny Fujikawa, can be seen in a printed pink dress with ruffles, emoting an expressive reaction as she tries to feed her mom a chip.
The actress has been in Greece for the last month to film Knives Out 2 opposite Daniel Craig and more A-list additions to the film, including Kathryn Hahn, Janelle Monáe, and Edward Norton. Kate even shared a selfie with Kathryn and both of their partners on Instagram at the end of June and gushed about their reunion. (The duo starred in the 2003 rom-com How to Lose a Guy in 10 Days together.)

“Reunited baby yeah!!!” Kate captioned the post. “If we can’t get Kathryn Hahn on @instagram then I’ll just keep having her take these pics with her selfie face and post them myself! Love and missed my bestie.”

Much of Kate’s family has also joined her on the trip. Along with Rani and partner Danny, Kate shared a selfie with her boyfriend and son Ryder, 17 — whom she shares with ex-husband Chris Robinson — aboard a yacht on the scenic waters on Instagram last week. (Kate also shares one more son, Bingham Hawn, 10, with former partner Matt Bellamy.)

The Almost Famous actress shared a pic of her two boys on vacation earlier this month and captioned, “My guys.”

It looks like Kate’s famous mom Goldie Hawn joined in on the summer festivities in Greece, too. The famed actress shared an enthusiastic Instagram video from the Greek island of Skiathos in late June that showcased her silly dancing skills in the ocean.