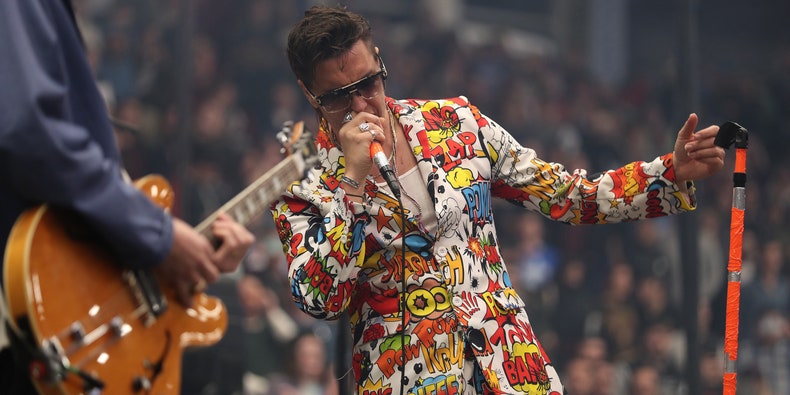 The Strokes played a set at Bernie Sanders’ rally in Durham, New Hampshire tonight (February 10). During their performance, the band played a brand new song called “Bad Decisions,” premiered a video for a new song called “At the Door,” and at the end, Julian Casablancas said, “Album’s coming out April 10.” Presumably, it’s called The New Abnormal. Watch it all happen in the live stream below.

The band also covered Talking Heads’ “Burning Down the House” and performed their classics, including “Someday,” “Hard to Explain,” and “New York City Cops.” Watch their performance at the Whittemore Center Arena below.

Earlier in the evening, Alexandria Ocasio-Cortez, Cornel West, Cynthia Nixon, and others made speeches in support of Senator Sanders. Sanders then took to the stage for his own address, before introducing the Strokes.

“We are honored to be associated with such a dedicated, diligent, & trustworthy patriot—and fellow native New Yorker,” Julian Casablancas said in a statement announcing the New Hampshire concert. “As the only truly non-corporate candidate, Bernie Sanders represents our only chance to overthrow corporate power and help return America to democracy. This is why we support him.”

At one point during tonight’s concert and political rally, Casablancas’ stage banter took a strange turn:

So I’ve been super into pirates lately. As one is. As one does. Don’t
ask. Lot of similarities between the… I’m saying how pirates are the
enemies of all mankind. Great fashion sense, but they stole and raped
for money. As the people that Bernie is trying to knock out of office!
But not…no disrespect to pirates though. Modern businesspeople, way
worse. Alright. I’m just fuckin’ around, I love y’all, I’m just here
for the music. Uncontroversial music.

The Strokes’ last studio album was 2013’s Comedown Machine. In 2016, the Strokes released the EP Future Present Past. They’ve debuted two new songs live in the past year: “The Adults Are Talking” (which they played tonight in New Hampshire) and “Ode to the Mets.”

Read “The Urban Malaise of the Strokes’ Is This It, 15 Years On” over on the Pitch.