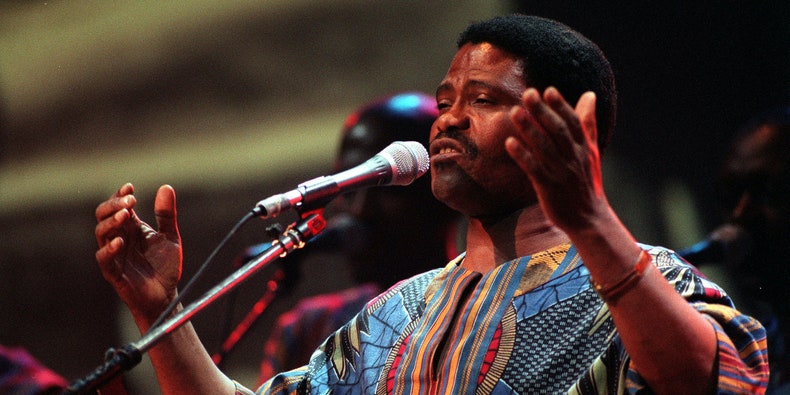 Joseph Shabalala, the singer who founded Ladysmith Black Mambazo and led the South African choral group to world renown, died Tuesday morning at a hospital in Pretoria, the BBC and Associated Press report. He had long struggled with ill health and retired from touring in 2014, but continued to make occasional public appearances.

Born Bhekizizwe Joseph Siphatimandla Mxoveni Mshengu Bigboy Shabalala in 1941, he grew up on a farm in Tugela, South Africa. He founded the group that would become Ladysmith Black Mambazo in 1959, according to Al Jazeera, and quickly became its leader and main composer, combining indigenous Zulu songs with the traditional a capella style of isicathamiya.

Their profile rose in the 1970s, with the Amabutho LP becoming Africa’s first gold-selling album. In 1986, they joined Paul Simon for Graceland and a subsequent world tour after Shabalala co-wrote “Homeless” with Simon. Simon went on to produce three of the group’s albums, including the Grammy-winning Shaka Zulu in 1987. They would win a further four Grammys, all in the Best World Music Album category.

The group continued to tour internationally, committed to spreading a message of peace and unity through music. After a Nelson Mandela memorial concert, Shabalala retired from Ladysmith Black Mambazo, passing the group down to his son. Xolani Majozi, Ladysmith Black Mambazo’s manager, told South African media outlet Timeslive that the group is now on tour in the United States. “They have been informed and are devastated because the group is family,” Majozi said, adding that the group would cut the trip short and return to South Africa.