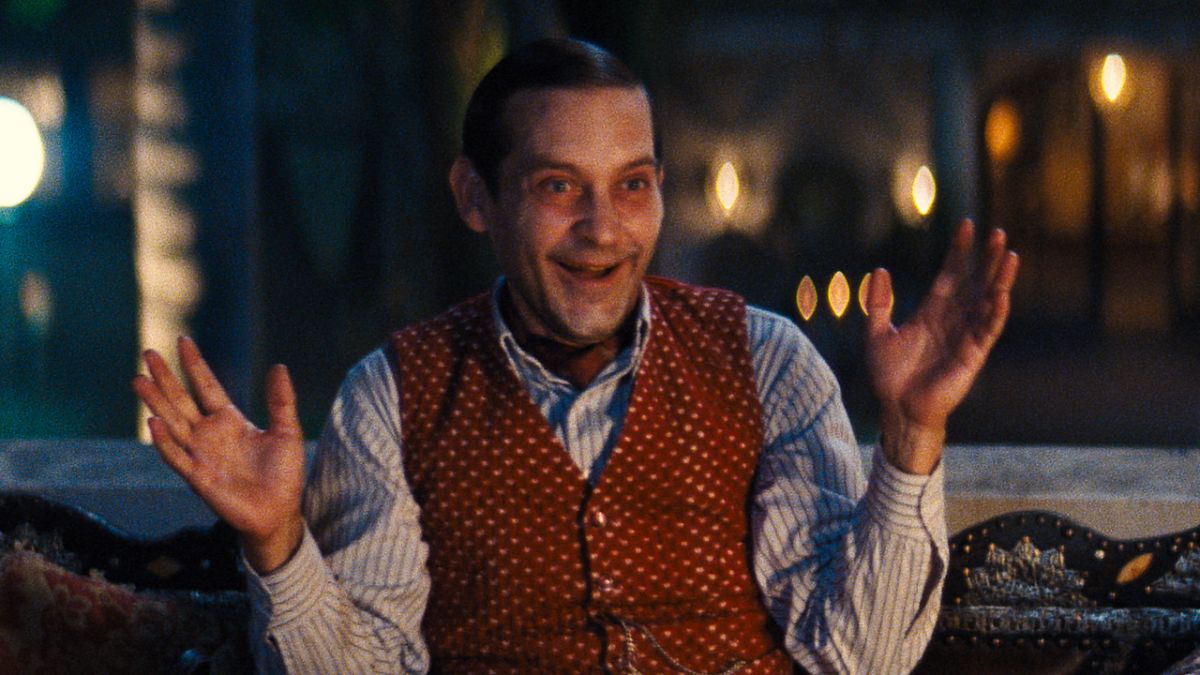 It was exciting news when we learned Tobey Maguire had signed on for his first film in years. It was doubly exciting to hear the film the Spider-Man actor joined was Damien Chazelle’s latest movie, Babylon, which features many other high-profile actors. It seems the actor is enjoying himself while promoting the upcoming film, because of a new video making the social media rounds. This video features Maguire beaming from ear to ear as he passes out Champagne to audience members at an early screening of Babylon.

In a TikTok users video, Maguire is smiling and cracking a joke about ensuring everyone is at least 21 as he started handing out mini-bottles of Champagne before the movie started. If you have seen Babylon’s wild and NSFW trailer, then you already know this is apropos of the film’s themes of Hollywood debauchery and excess. The film’s director Damien Chazelle previously told a crowd of fans gathered for an In Conversation panel at the Toronto International Film Festival that his upcoming film was going to be “big, boisterous, and loud.” You can check out the video of Maguire bringing a similar energy to the screening below:

It seems like The Great Gatsby star is having a good time trying to ensure moviegoers can do the same with a refreshing bubbly, as long as they’re of legal drinking age, of course.

Tobey Maguire is an iconic actor who has been in great movies (I mean just look at his best 11 films), but he hasn’t done much since 2014. The actor did make his big screen comeback by reprising his role as Sam Raimi’s version of Spider-Man, along with the two other Spider-Men (Andrew Garfield and Tom Holland), in Spider-Man: No Way Home. However, it is nice to see the actor back in celebratory mode alongside an ensemble cast that includes the likes of Brad Pitt, Margot Robbie, Diego Calva, Samara Weaving, P.J. Byrne, the always incredible Jean Smart, and others.

While the filmmakers behind Babylon were able to keep the plot under wraps for the duration of its long development, what we do know about the film is that it will transport audiences back to the Hollywood of the 1920s. The movie tells the story of the transition from silent to talking films when Los Angeles began to shape itself into the capital of entertainment. As for Maguire’s character, he is playing a mob boss, loan shark, and adrenaline addict named James McKay. The character is also rumored to be a take on a real-life Reano gambling kingpin of the same name.

Babylon parties its way into theaters today, December 23. However, early reactions to Damien Chazelle’s movie have been somewhat mixed, though I would argue being able to see Tobey Maguire returning to the big screen in such an outlandish and fun role is enough reason to purchase a ticket. To learn more about Maguire’s latest film be sure to check out our thoughts on Babylon, and feel free to check out our 2023 release schedule while you’re on the site.