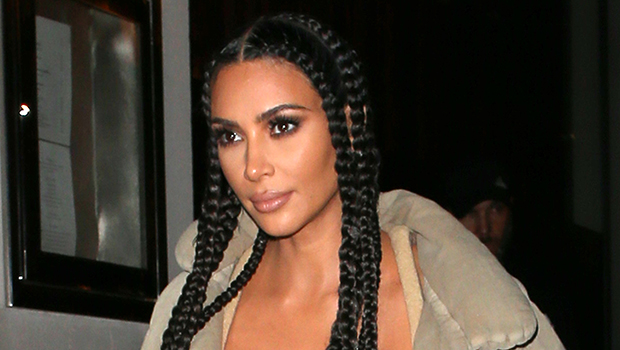 Kim Kardashian modeled a new velvet bodysuit from her shapewear brand SKIMS ahead of the collection drop. The businesswoman, 41, showed off a black bodysuit with an exposed back and attached gloves in a series of videos shared on Instagram Story on Wednesday, Dec. 1, expressing her excitement for the “amazing” products.

The velvet bodysuit will come in a variety of colors, including peach, chai, and chestnut, among others. SKIMS Velvet, available to shop on Thursday, will also include a corset, bralette, crop top, onesie and thong. Prices vary between $48 and $98.

The videos come after Kim reunited with soon-to-be ex-husband Kanye West in Miami on Tuesday, Nov. 30 for a Louis Vuitton tribute show dedicated to the late Virgil Abloh, who died on Nov. 28 at the age of 41 after a private battle with cancer. The luxury brand dedicated its Spring/Summer 2022 menswear show to the prolific designer, who worked as artistic director of menswear at the brand up until his death.

Kim and Kanye, 44, brought along their eldest daughter North, 8, to the show, titled “Virgil Was Here,” on Tuesday evening. The former couple, who separated in February after nearly seven years of marriage, also share children Saint, 5, Chicago, 3, and Psalm, 2, together. Prior to attending the show, both paid homage to the trailblazer.

Kanye paid tribute to the late designer during a recent Sunday Service, having his choir perform a cover of Adele’s “Easy on Me” in his memory. On Instagram, Kim penned a message alongside photos of Virgil, writing, “I have a hard time understanding why so many pure souls were taken away so early.” She wrote, “You always gave so much of yourself to the world because you wanted it to be doper. This one is hard to process. I can’t even believe I am writing this… We will miss you so much Virgil and love you so much.”