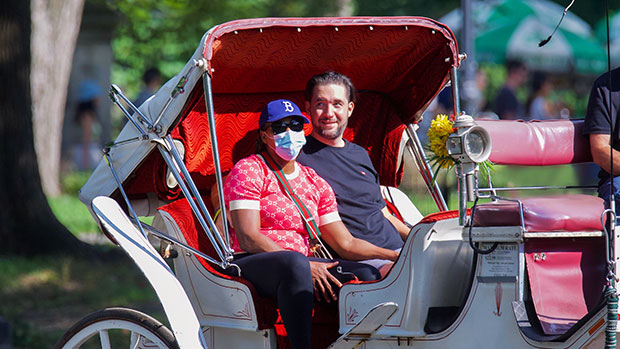 Who needs tennis when you have ‘love’? While the US Open was finishing up, Serena Williams and Alexis Ohanian took in the sights of NYC via a horse-drawn carriage.

Though Serena Williams opted not to partake in the U.S. Open due to injury, that didn’t mean she didn’t enjoy all that New York City had to offer. As Emma Raducanu defeated Leylah Annie Fernandez during Saturday’s women’s final, Serena, 39, spent some quality time with her husband, Alexis Ohanian, on a sweet date. Alexis, 38, took Serena for a romantic tour around Central Park in Manhattan on Sept. 11, riding side-by-side in one of the park’s famous horse-drawn carriages.

Serena wore a baseball cap, red checkered top, a pair of black leggings, sandals, and facemask – the perfect pre-Autumn outfit. Alexis opted for a puffer jacket, which he took off during the ride, as well as a pair of shorts and a black t-shirt. During the romantic day trip, the two snuggled up together as they both enjoyed New York City in September.

Normally, Serena would be coming down from an epic performance at the U.S. Open, but this year, she pulled out of the tennis tournament, citing the injury that forced her to withdraw from Wimbledon. “After careful consideration and following the advice of my doctors and medical team, I have deiced to withdraw from the US Open to allow my body to heal completely from a torn hamstring,” she wrote in an Aug. 25 announcement. Serena also added that NYC is “one of my favorite places to play” and that she’ll miss “seeing the fans but will be cheering everyone on from afar.”

Since then, Serena has spent some quality time with Alexis and their daughter, 3-year-old Olympia Ohanian. At the end of August, Olympia gave her dad a makeover. “Are you going to make me beautiful?” he asked his daughter, to which she replied, “Maybe. MAYBE!” Less than a week later, Olympia sat down with her mother for a piano lesson. When Serena hit the wrong key, she turned to her daughter and asked, “Are you gonna fire me?” Thankfully, Olympia just kept on playing. “I teach her tennis… She teaches me piano,” the tennis icon (and 23-time Grand Slam winner) captioned her video. At the start of September, Serena and Olympia traded the piano for the mixing bowl. The adorable duo — dubbed “Olympia and Momma” — made a rainbow cake together.