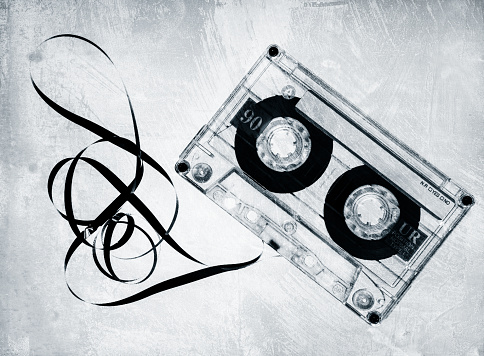 Let me be clear from the outset: I do not like cassettes. Anyone who fetishizes them in today’s digital world probably didn’t live through the era when they were our only option when it came to portable music.

If you’re of a certain vintage, you remember the issues. They sound awful with an ever-present hiss in the background. They jammed. The cases broke. They melted in the sun. Making a mixtape had to be done in real-time. And you’ll also remember why you often needed a pencil to make sure they played properly. Compared to what came later, cassettes are garbage.

But when I chanced upon a cache of old cassettes that I’d stuck in my crawlspace — I have no idea why I kept them and there’s no rhyme or reason to the ones I didn’t throw out — I was hit with a series of odd recollections. I wouldn’t say I got all nostalgic, but I was transported back to the cassette era. I made a list of what came back to me as I examined my find.

Read more:
The history of the music cassette and why it refuses to die

Labels were ripping us off with bad sound

Prerecorded cassettes from record labels were always made of inferior stuff to most of the blank tapes we used to make mixtapes. The case hinges snapped if you looked at them wrong. The tapes themselves felt cheap. And the audio quality of mass-produced units sometimes wasn’t much better than AM radio. Two albums come to mind: Elvis Costello’s first album, My Aim is True, and Spectres from Blue Oyster Cult, both released in 1977.

Costello’s record was made at Pathway Studios in London, which evidently had no noise reduction equipment whatsoever. The original release was the hissiest album of all time with so much background noise that you could hear it through the music. And whoever mastered the BOC record must have had some kind of hearing impairment because there’s almost no high or low end. Even on vinyl, all you could hear was the midrange. On cassette, it was atrocious. And for this I paid $8.99? Accounting for inflation, that was the equivalent of 30 bucks back then.

Marginally less bad was my cassette version of 2112 by Rush, which I remember purchasing at a K-mart in south end Winnipeg. I had wanted to buy the vinyl version but they were sold out so I went with the cassette as my second choice. It wasn’t until I bought the compact disc some years later that I realized what I’d been missing. Still, that cassette sucked me into the Rush universe.

How to prevent a prerecorded cassette from jamming

Because of their cheap construction, prerecorded cassettes jammed more than good-quality blank tapes. My friend Donald believed he’d stumbled onto a trick to prevent that. Whenever he bought a prerecorded cassette, he’d give it a diagonal twist one way and then the other. Each twist resulted in a satisfying chiropractic CRACK that he believed somehow freed up the interior mechanism, thereby allowing for better tape flow.

Although I don’t recommend such a practice, I began doing the same thing. Funny how it seemed to work.

Liner notes were for vinyl only

The folded piece of heavy stock paper that went inside the cassette case is called a J-card. Many of the crawlspace cassettes I examined had some artwork and the tracklisting on the outside and were completely blank on the inside. Totally scandalous, especially since it wasn’t uncommon for a cassette to sell for a dollar more than the vinyl version of an album. My copy of April Wine’s First Glance (1979) fell into that category. What a rip.

The oldest prerecorded tape I found was a first-edition original 1973 release of Aerosmith’s self-titled debut album. Even brand new, the artwork looked like a bad colour photocopy. The flip side of the J-card is blank. And in a font bigger than the tracklisting is the message “COMPATIBLE RECORDING. Playable on stereo of monoaural equipment.” This was very important if all you had was an old portable Lloyds cassette machine that mom bought you for Christmas out of the Eaton’s catalogue.

I found my one-and-only autographed cassette

It’s a 1989 album called March by Lene Lovich. I checked its value at Discogs.com and found that it’s now worth $1.82.

We experimented with lots of tape brands and formulations

Cassette kids back in the day would always fight over which brand of blank tape was the best. While some were gaga over Maxell and Memorex, I found recordings were a little dull at the top end. I was a TDK person myself, favouring SA-60s and SA-90s, which used chromium dioxide tape. I did, however, experiment with other brands including BASF (not bad) and AMPEX (so-so) before moving to Denon C-100s in the late 1980s and early ’90s. For some reason, I have a bunch of caseless Canadian Tire brand tapes that were sold in packs of three for $1.99 under the name Pulsar.

One thing we all learned was to never buy any kind of C-120 tape, which meant you could record 120 minutes worth of audio (60 minutes per side). To get that much tape inside a standard compact cassette shell, the tape itself had to be very thin (0.24 mm, to be exact). When you rewound or fast-forwarded one of these tapes, the sudden stop at the end of a side stretched the tape and distorted the music. They were also more prone to jamming. Amazingly, though, you could once buy C-150 and C-180 blanks. They must have been extra-awful.

Cassettes were perfect for the car, especially if you could make your own compilations. The music industry frowned on these homemade tapes (Remember the “Home Taping is Killing Music” campaign?) but in those simpler times, it was relatively easy to carve out an afternoon to transfer your favourite songs from vinyl. All the recording had to be done in real-time. And things got especially tricky towards the end of each side of the cassette. You wanted to leave as little blank tape as possible at the end, so you had to be creative when it came to timing things out to exactly 30 minutes for a C-60 or 45 minutes for a C-45.

Unbeknownst to us home tapers, cassette manufacturers weren’t always accurate with the amount of tape they used per cassette. For example, running at 1 7/8 inches per second, you needed 282 feet of tape to make a C-60 cassette. However, the actual amount provided was closer to 300 feet. Some C-90 tapes had 443 feet of tape instead of 423. This explains why those of us home taping perfectionists could never understand why, no matter how carefully we operated our stopwatches, we could never perfectly fill up a side with no blank space remaining.

I’d admit that it was fun coming up with names for these mixtapes. I found a series of Denon tapes labelled Alternative 1-7. Editions 8 and 9 are missing, but I still have tapes marked Alternative 10-12. There are also tapes labelled “For the Car,” “Party Tape,” and “Heavy and Hard.” Each contains a snapshot of my musical headspace at certain points in my life.

So am I going to play any of these tapes? I’m afraid to, honestly. Magnetic recording tape dries out over time, meaning that the adhesive that holds the magnetic particles to the tape loses its grip. Unless these tapes are properly rehabilitated — a process called “baking” — they risk disappearing in a cloud of dust. I think I’ll just put them back in the crawlspace — a dry, cool space away from any electromagnetic interference — until I decide what to do with them.

And I know exactly where I’d start. I found one mixtape labelled, “Stuff That Sterilizes Frogs.” That’s my handwriting. I wonder what’s on that tape?

Alan Cross is a broadcaster with Q107 and 102.1 the Edge and a commentator for Global News.