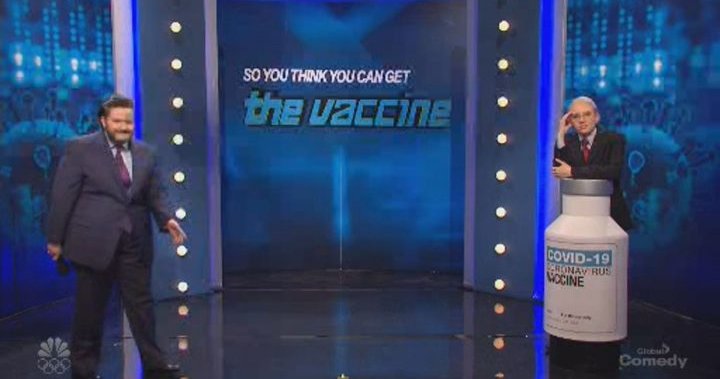 Saturday Night Live (SNL) took aim at America’s rollout of the COVID-19 vaccine in its newest cold-open, this time using a game show hosted by the country’s top public health doctor in order to determine who gets inoculated next.

“Tonight we give everyday Americans the chance to vie for vaccine eligibility on a little show we like to call ‘So you think you can get the vaccine,” said Fauci, who was played Kate McKinnon.

“Getting the vaccine shouldn’t be a competition but Americans will only wanna get it if it means someone else can’t.”

Fauci then introduced the three guest judges for the night, the first being California Gov. Gavin Newsom who was played by Alex Moffat.

“Teeth white, bodies tight, COVID — pretty bad,” answered Newsom to Fauci’s question of how things were going in the state.

Next introduced was New York Gov. Andrew Cuomo, who earlier on Saturday faced new allegations of sexual harassment from another former aide.

“I know, I know — I’m in the freaking doghouse again,” opened Cuomo, who was played by Pete Davidson.

The next and last judge on the list “narrowly escaped being kidnapped by a group of men who’s finger prints probably had Cheeto dust on them,” according to Fauci, who then introduced Michigan Gov. Gretchen Whitmer.

Next up on the show were several contestants who all had to make their case to the judges in order to get a shot of the vaccine.

One contestant argued that her job in IT for Onlyfans made her eligible for the vaccine, while another faked being an elderly woman in order to get a shot for a date.

“Wow OK. On the second to last day of Black History Month? Wow,” remarked on the contestants, who is Black, after not getting the vaccine.

“CVS — It stands for Chex Mix, Vodka and “So Much Plan B,’” said Fauci in one such shout out.

One contestant who was pregnant was also offered a Kirkland brand vaccine because they were running low on Moderna.

“We do have some trials for the Kirkland Signature vaccine from Costco,” said Fauci. “It’s big enough for you and your little one and it comes with a free pack of 24 hotdogs.”

Also making an appearance as a contestant on the show was Cruz, reprised by Aidy Bryant, who gave a small stand-up comedy routine.

“I’m sorry, my arms are tired because I just flew back from Cancun, Mexico,” said the governor. “But, can you really blame a brother for wanting some sun?”

The last contestant on the show was 85-year-old former army doctor played by Mikey Day.

After winning the hearts of the judges, the senior was then told to make an appointment online to which he expressed difficulty in doing.

“But if you do feel sick, make sure you leave the nursing home and get to the hospital,” Cuomo chimed in at the end with a wink.