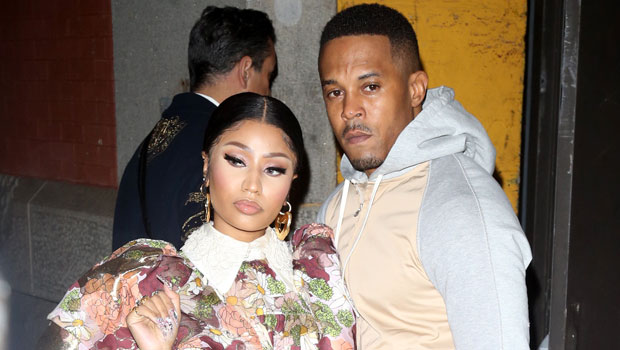 Nicki Minaj flaunted various cozy poses with her husband Kenneth Petty in new pics she took on the night of the American Music Awards.

Nicki Minaj, 37, and Kenneth Petty, 42, appeared to have an at home date night while enjoying the American Music Awards with friends on Nov. 22, just under two months since they welcomed their son. The singer took to Instagram to post PDA-filled photos with her husband for the first time since giving birth and they were both looking stylishly fantastic. She showed off two different outfits in the snapshots, including a white mini dress under a white blazer and black knee-high pantyhose, and a black blazer and matching shorts, and he wore a black zip-up jacket with a section of multi-colored stripes and matching black pants.

Nicki also topped off her looks with silver heels and let her long wavy blonde and pink-colored hair down as Kenneth wore neon green and black Nike sneakers. They both posed on a staircase and in a hallway while wrapping their arms around each other and flaunting other sexy moves for the camera. The “Superbass” crooner captioned the series of pics with a simple pink bow emoji.

Just a couple of hours before her latest pics were shared, Nicki posted a video that appeared to show her and Kenneth enjoying the AMAs with friends as she thanked her fans for her big wins, which included Favorite Female Artist in the Rap/Hip-Hop genre and Favorite Song for “Tusa” in the Latin genre. “Best female HIPHOP & Best LATIN SONG “TUSA” w|@karolG!!! The barbz keepin they foot on yall neck chile🥴. Omg my fans always know how to rock the VOTE. lol. I Love you guys so much. Thank you AMA’S!!!!! I’ll see you next year 🎀😘🦄,” she captioned the clip.

Nicki’s latest pics and video marks the first time she’s shared posts that feature her hubby since they announced the birth of their baby boy and they look more in love than ever! Although the rapper has been mostly private when it comes to her first child, she has shared some posts that express her joy in becoming a mom as well a cute post featuring her son’s little foot. “I am so grateful & in love with my son. Madly in love. My favorite liddo boy in the whole wide world. 🥳🧸🎁🎈,” she wrote in an Oct. 15 post thanking others for their well wishes.

We look forward to seeing more posts that either feature Nicki and Kenneth’s new addition or give more details about him! The talented beauty’s career and personal life both seem to be thriving at this time and we couldn’t be more thrilled for her!