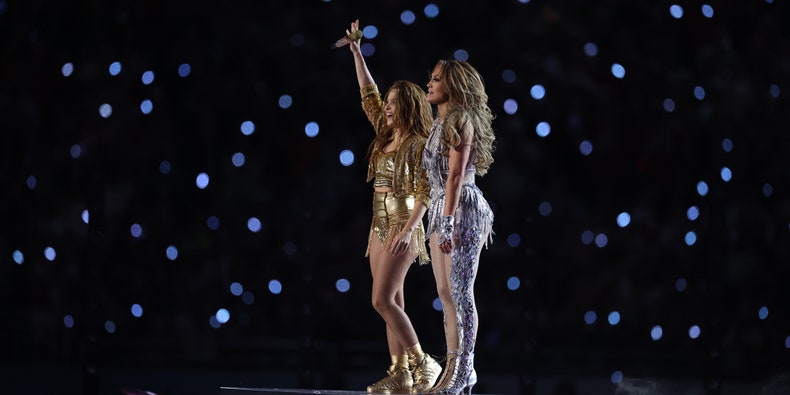 The Super Bowl 2020 Halftime Show took place tonight and featured performances from Jennifer Lopez and Shakira. The two women performed hits from across their careers in a stage show filled with dancers, sparkling outfits, salsa choreography, and more. Watch it happen below.

J.Lo did “Jenny From the Block,” “Ain’t It Funny,” “Get Right,” and “Waiting for Tonight” (while spinning on a pole). At one point, J Balvin appeared to perform “Que Calor,” as well as a mashup of “Mi Gente” and “My Love Don’t Cost a Thing.” Later in her set, J. Lo did “On the Floor,” and “Let’s Get Loud,” which interpolated Bruce Springsteen’s “Born in the USA.” Shakira joined in to perform “Waka Waka,” while salsa dancing with J. Lo and a crew of dancers.

Earlier in the show, Shakira performed “She Wolf,” “Empire,” (which used a snippet of Led Zeppelin’s “Kashmir”), and “Whenever Wherever.” Bad Bunny then joined her for versions of “I Like It Like That” and “Chantaje.” She closed out her set with “Hips Don’t Lie.”